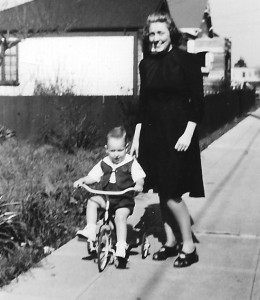 Someone asked me why I named my beautiful orange Manx cat Air-nges.  Well, here’s the story:

When I was about nine years old some of Pappy’s relatives came from eastern Oklahoma to California to visit.  I think they probably stayed for a week or so out at my Aunt Kate’s and from there visited various family members.  I remember they had two boys a bit younger than me and they came over to our house a couple of times.  The family had a distinct Oklahoma brogue that my brother and I imitated when they were not around.  My mother advised us that it wasn’t nice to make fun of the way other people talked.  Pappy was from Oklahoma and had a bit of an “Okie” brogue, but it was more the way he constructed grammar than his actual phonetic pronunciation.  It was like:  “Awright you boys, git yer ass in the car ‘for I take a notion to drive off and leave you here.”

It wasn’t that we thought we were better than them, our mother taught us better than that; we just thought they talked funny.  Now my mother grew up on a farm in western Missouri.  Lots of people from where she came from that came to California during the great depression talked like our visitors.  She didn’t.  I suspect Pappy didn’t either, because of her.  She was, or could have been the prototype for June Cleaver a dozen years later.  Anyway, the visitors came over one Sunday afternoon without their children and in the course of conversation Pappy offered to take them around the area to view the various landscapes.  Now they don’t grow oranges commercially in Modesto, it’s too cold in the winter.  What they do grow in large and impressive quantities are deciduous fruit (peaches, plums, apricots, etc.), almonds and walnuts, and grapes.  But pappy knew of an orange grove that was geographically protected from the cold that was heavily laden with unpicked, ripe oranges and that’s where he decided to take them.  We drove down a side road up to the beautiful orange grove and parked the car.  I was in the front seat between Pappy and my mother.  I don’t remember my brother David being there, but I remember our guests being in the back seat.

“My God…would ya look at all them Air-nges!” exclaimed our cousin in the back seat.

“Air-nges?”  I said, rather loudly, “Those aren’t Air-nges…those are Oranges.”

I can still remember the simultaneous surprise, pain and little stars I saw as my mother’s backhand hit the side of my head.  It took at least half a minute before I could even see straight.   No one said a word.  Pappy, my mom and our cousins got out of the car and walked around admiring the wonderful orange grove.  I stayed in the car, rubbing the knot my mother had put on the side of my head.  She never looked at me until we got home.  By then there was no need to explain her action…I had learned my lesson quite well.  My parents had dissimilar teaching techniques.  Pappy was like an old Marine sergeant…he’d bark at you and make you think he was going to get physical, but he seldom did.  Mom was like a dog trainer, she’d catch you in a compromising situation and make a “hard correction” that you’d never forget.  I certainly never corrected anyone’s English after that, in fact I still sometimes offer visitors “Air-nges” from our beautiful trees in North San Diego County