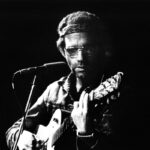 Several years ago my pal Mississippi Slim played a couple of my songs for a blues-rock artist named Corey Stevens. Corey was preparing to do an album “Blue Drops of Rain” and decided to include my song “Head Shrinker.” “Corey says he loved the two songs I played for him and he thinks you could be his J.J. Cale,” said Slim “Who’s J.J. Cale?” I replied. “You know,” said Slim, “he’s the guy who wrote all those songs for Eric Clapton.” “Who’s Eric Clapton?” I... Read more