From My Rearview Mirror 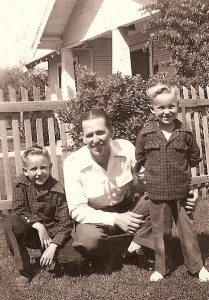 So when I was about eight years old Pappy opened a plumbing shop across the street from our house at 108 Las Flores Ave., Modesto, CA.  At that time I was beginning to pressure my mother to allow me to join some of the older boys in the neighborhood at Dry Creek, which was about a quarter mile from our house.  By the time I was 9-10 years old, my life was full of adventure, alternating between playing with my friends at “the creek” and hanging out across the street from the plumbing shop.  Sometimes I would spend several hours playing in the neighborhood with a conglomeration of kids of various ages.  There were a couple of teenage boys that I admired who allowed me to “hang out” a bit with them.  Both would serve in the Korean War, one as an air force fighter pilot, who was killed in combat and the other with the 82nd Airborne.  Closer to my age were the Wilber boys who lived a block away and always seemed to have some kind of ball game, or adventure of one kind or another planned, or going on.  My first trip to “the creek” was with a boy a couple of years younger than me to go fishing.  I was nine and had gone fishing with my dad several times, so I knew how to bait a hook and string whatever fish we might catch.  My younger friend Dennis had been allowed to fish there at such a young age because you could see most of the creek from his house and also because his parents worked and his elderly grandmother who was supposed to be keeping track of him, hardly ever did.  Luckily for me, I was able to parlay Dennis’s situation into a formidable argument that I was two years older than him and my mother was treating me like a baby.  Pappy was busy and didn’t concern himself with my day to day activities much; unless of course I wandered over to the shop, in which case he usually put me to work.  Pappy taught me how to thread pipe with a Ridgid 3-way die and stock miscellaneous fittings in the appropriate bins.  He paid me fifteen cents an hour, which seems paltry in today’s world, but you could buy a large candy bar or a soda for a nickel.  I could work three or four hours during the week and have enough money to attend the Saturday afternoon matinee at the La Loma Theater, two blocks from our house for a twenty cent admission, pop corn for a dime and candy and soda as previously mentioned.  In a couple of years I had advanced in skill and work ethic to a point where I could command, first twenty-five cents an hour and then thirty-five cents an hour.  Add a couple of extra hours on Saturday morning and I might have a couple of bucks with which to maneuver.  A large milkshake at the Foster Freeze cost a quarter.  Pappy had grown up in rural Oklahoma in a large family and was as independent as he was street-wise.  He didn’t over parent; he just allowed me to try whatever I wanted to and encouraged me to approach life fearlessly.  That’s what he did…it was a hard standard to live up to.  Regardless, I could drive a truck when I was twelve, create lead joints for cast iron plumbing systems, run a pipe machine and dig a plumbing trench at an even younger age.  Simultaneously, I spent as much time hanging out with my friends and listening to music, reading comic books and going to movies as I could manage.  Although Pappy didn’t have much formal education, his business grew rapidly.  I grew along with it and when it was discovered that I hadn’t attended school for four months, I was allowed to quit school and begin working full time at barely sixteen years old.  The three years between leaving school and being inducted into the U.S. Army provided me with social and learning experiences that gave me enough confidence, ambition and grit to successfully navigate through my “roaring twenties.”