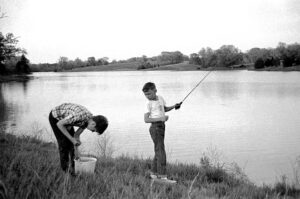 The first time Dennis and I went “fishin’” I came back home with a string of a dozen, or so, fish.  Dennis knew the names of the fish; we caught perch, blue gill, catfish and an occasional undersized bass of one stripe or another.  I proudly walked up to our Las Flores Ave house and summoned my mother.

“Look Mom, I caught all these fish!”

“That’s nice, honey, what are you planning on doing with them?”

“Oh no, Mom,” I replied, “they’re already clean, I just took them out of the creek a half-hour ago.”

“That’s not how you ‘clean them’,” she countered, “go out back and get a board off the woodpile 6 or 8 inches wide and a couple of feet long.”

I was nine and I’d helped my grandpa build our back fence, so I know how to select a board such as she described.  I returned to the front yard and she was already standing by with a formidable looking kitchen knife and a flat pan.

“OK,” she began, “first you cut their heads off, like this.”

She took the sharp knife and pulled it across the fish, just below the head.  She moved the detached head over with the knife and then instructed:

Cutting the tail off wasn’t as unpleasant to watch as the head had been and I thought, “well, this isn’t that bad…I can do this.”

“All right, now you have to gut them.”

“Gut them!”…Geez, that didn’t sound like something I’d ever want to do.  But I watched as she ran the knife down from where the severed head had been, all the way to where she had removed the fishtail.

“Now all you have to do is take the knife and scrape out all the insides, leaving the spine and connecting ribs, along with the flesh.  Take the guts and put them in this bag.”

“Mom, I don’t think I want to do this,” I said, “Can we just throw all the fish in the garbage and forget about having them for dinner?”

“Sure,” she said with a mischievous smile, “so you won’t be needing to go to the creek anymore and can hang around here with your little brother.”

In a few minutes I was cutting and gutting like I’d been doing it my whole life…all nine years.  When I had my catch thoroughly prepared, I took them inside, into the kitchen and presented them to my mother.  She very graciously accepted them and began to make the preparation she would coat them with before placing them in the frying pan.  I returned outside and took the God-awful smelling fish heads, tails and guts to the garbage can, where I buried them deep inside to block as much of the foul smell as possible.  When Pappy came home we had a fish dinner and my mom told Pappy what a fine fisherman and fish gutter I was.  I ate a couple of the fish, but except for an occasional tuna sandwich, I don’t think I ever ate fish again.  That doesn’t mean I didn’t continue to fish.  I just got smart fast and learned to take them to the neighbors before I came home with them.